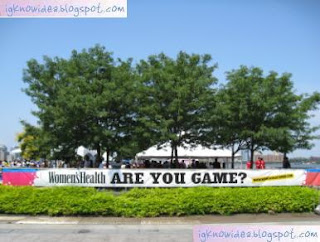 Women's Health sponsored the "Are You Game?" event this past Saturday in New York City. Let me say that this was the best fitness event that I have ever been to!! Not only was the view gorgeous (Check out the pictures below on the fabulous view and location- Hudson River Pier 46), the crowd was manageable and there were many great sponsors there. Also, they had an inflatable rock climbing and bungee jumping apparatus there for people and kids to play with. Now, how often can you do that unless you join a gym? They also had samplings of a tea drink and Edy's Slow Churned Yogurt (YUM!!) so you wouldn't get hungry/thirsty.

Maybelline and Garnier Fructis was sponsors of the event, so right when you register, you could see people getting their hair and make-up done. I got there around 10:30AM, so as it got closer to 11AM (right before my workout class started) more and more people came. The lines for the hair and make-up got longer, and the even the lines for the workout class. Some lucky folks were able to take the first class, Lyrical Vinyasa, and squeeze in line to take the second one, Surfboarding, which I took.

To see more pictures and to learn which class I took...

I tend to like workout classes that are smaller, so luckily they capped each class to about 40-50(?). They also had to have a limit because for each class, they provided workout materials. It was either a yoga mat or a towels, but I also did see hula-hoops (for the Hula Hoop Pilates). I was only able to take one class but it was one that I wanted to try out- the Surfboarding class which uses gliding disks which really work out your thighs and abs/arms. Imagine yourself in a squating position, with both feet on the gliding disks and you extend one of your legs in and out to the side. You do that for about 10-15 minutes and switch sides. Another move I learned is doing half pushups with your hands on the gliding disks and then in plank position, you extend your arms out and then back in normal plank position. What a great workout for your arms and back muscles!

The weather was absolutely beautiful so it made the whole event enjoyable. See below! 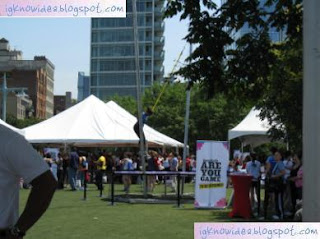 Email ThisBlogThis!Share to TwitterShare to FacebookShare to Pinterest
Labels: are you game, beauty and all that, beauty event, fitness, women's health magazine, womens health

I recently came across your blog and have been reading along. I thought I would leave my first comment. I dont know what to say except that I have enjoyed reading. Nice blog. I will keep visiting this blog very often.