SELF Workout in the Park 2009- Updates 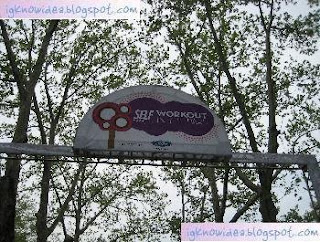 I went to this year's SELF Workout in the Park, like I said I would in my earlier post (read here). It was just as fun and crowded as I expected since it was similar to last year's event. This time, I was only there for two hours but I had a good workout- urban rebounding, see below, and scored some nice goodies, which I will post pictures later.

I am overall very pleased that I spent a Saturday morning/early afternoon at the Central Park because 1) it is gorgeous and 2) it is great to see so many people motivated to work out and stay healthy! They also limited the number of tickets to the event, so it wasn't as crowded as last year. I was able to stand in line and actually get somewhere. There were noticeably fewer sponsors and giveaways this year and they actually had a booth where they were selling food/snacks/sandwiches. That was pretty empty since people were snacking on their free Smart Food snacks and protein bars.

The picture on the left is of the main stage, where the main aerobic workouts were. You can see the huge crowd in front of the stage, which did not leave much room for the booths that were on the opposite side of the stage. The picture you see on the right is a booth that was on the right side of the stage, there weren't too many people interested in this one as you can see I was able to take a good photo without any problem. There was a long line next to this since they were having a "Spin the Wheel" contest.

This is another picture of the main stage but the view is from the entrance. It's hard to see but there are some dancers right now on stage and I believe this is for the third segment called Rock Bottom, an intense lower body workout. The other picture on the right is of mini trampolines. This is a spectacular workout for the class, Urban Rebounding. It's a non-impact, cardio workout where you're basically bouncing up and down on the trampoline and doing some kicks and jumping jacks moves for 20 minutes! My lower abs definitely felt it the next couple of days.

I'm looking forward to next year's SELF Workout in the Park!!

Email ThisBlogThis!Share to TwitterShare to FacebookShare to Pinterest
Labels: beauty and all that, beauty event, self magazine, self workout in the park

I'm so jealous! I read about this event online, but it was geographically impossible for me to attend. Looks like lots of fun. Glad you had a good time!